Book ‘Em event at RCC to be virtual this year 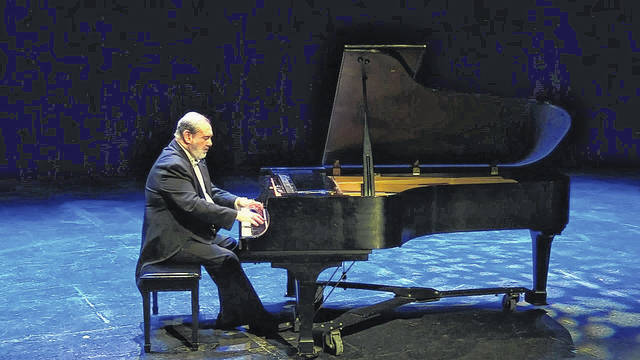 PEMBROKE — Art and music have ways of transcending life’s challenges, even during a pandemic.

Following that belief in part led the Givens Performing Arts Center and International Artists Foundation to win a highly regarded award for their recent collaborative project.

Givens Performing Arts Center, on the campus of The University of North Carolina at Pembroke, and International Artists Foundation in Lumberton are the recipients of a 2020 Gold NYX Award for its collaborative video presentation of music by Lumberton composer Mark Andersen. The NYX Video Awards is an international competition open to marketing, communications and videography professionals whose creative expertise and proficiency are both celebrated and recognized.

“This is an exciting honor,” said James Bass, GPAC executive director. “I’m so proud, not only of the award, but for the story that led us to this humbling recognition.”

The project began when Bass, who is credited with producing the project, reached out to Mark Andersen about performing a concert for GPAC’s Front Row Arts Series, which presents virtual performances by local and regional artists.

In August 2020, Andersen recorded “Rhapsody for Piano” in three movements for the series. The music was written by Andersen during the COVID-19 pandemic and debuted on the GPAC stage.

The concert was special not only because it was the first time the music was performed on stage, but Andersen feared it may be his last performance.

“Mark is truly a gift to our community. He is an absolutely amazing musician, and I wanted his music to be a part of this series,” Bass said. “I had no idea at the time that Mark was facing a very daunting health challenge.”

The health challenge was renal cancer, diagnosed about a year ago.

“It was stage 3 and I did not know how that would turn out,” Andersen said. “There was a very strong possibility that that might have been my last performance.”

Because Anderson was previously diagnosed with multiple sclerosis, his condition was inoperable at the time.

“They needed to get me in some better shape before they could do the operation,” Andersen said. “It was kind of a waiting game to see if I could get in good enough shape to have the operation before the cancer began to spread and it was too late.”

After witnessing the positive feedback from and the large viewership of the concert, International Artists Executive Producer Lynn Andersen felt compelled to submit the project for the prestigious NYX award. On Dec. 18, Andersen learned that the submission was selected after an intense judging period featuring 1,616 entries from 33 countries.

“We were extremely pleased to have worked with GPAC Producer James Bass, and his staff, during the production of this important concert of original music,” Lynn Andersen said.

Having a nice stage and a professional staff to work with made the process that much easier, he said.

“We were able to have a very nice venue that was easy to work in and people that are easy to work with,” Lynn Andersen said. “They were all prepared for us. We filmed and came home and started editing.”

Although based in Lumberton, Mark Andersen is an internationally known composer and concert artist. His education includes East Carolina University, The American Conservatory of Music, and the Paris Conservatory of music, where he studied organ with Marcel Dupré and composition with Nadia Boulanger. He has performed internationally at many venues, including Royal Albert Hall, London; Carnegie Hall, New York; Lincoln Center, New York; and The Kennedy Center in Washington, D.C.

He has composed more than 200 pieces for organ, choir, symphony, and solo instruments in his career, including classical works and music for Broadway and opera stages.

Mark Andersen said he was grateful for the invitation to perform what he thought may be his final performance at GPAC.

“I certainly would not have had the opportunity at that point to go back and perform at Carnegie Hall or any of the other major places, like the Kennedy Center or somewhere I had performed many times before in my life, but GPAC is here,” Andersen said. “It’s my favorite performance space in Robeson County so I was very, very happy to have the opportunity to do it.”

Shortly after Andersen’s concert debuted, he learned his prayers had been answered.

“I relied on my faith, and the Lord was good to me and got me into good enough shape to where I got the kidney removed,” Andersen said. “It didn’t spread and was contained in the kidney that was removed.”

“When Mark told me about his upcoming surgery and shared his fear that this might be his last performance — and in the midst of a global pandemic in which live performances weren’t even an option — I really knew what we were doing was something special,” Bass said.

Andersen’s video, which has received more than 1,000 views, is a 30-minute performance of original music composed during the quarantine months of the pandemic, is titled “Rhapsody for Piano.”

Bass said that not only has it been shown on the GPAC webpage but through Carnegie Hall as well.

“I’m simply astounded by how popular it became in such a short time,” Bass said.

“We are proud of all the amazing individuals, agencies and companies who joined the NYX Awards this year,” said Kenjo Ong, CEO of the International Awards Associate. “This win by International Artists Foundation and Givens Performing Arts Center is not just a testament to their unbridled talent, but one that will inspire many for years to come.”

The winning entries were judged impartially by a group of esteemed marketing, communications and videography professionals. The IAA selected a panel of international judges in the adjudication process and adhered to a strict code of excellence. The NYX Awards embraces diversity and ingenuity that comes from all corners of the world. The 2020 panel was comprised of judges from 16 countries.

“A NYX Award has never just been about the title. It’s an affirmation for the hard work these individuals have given for their work,” Ong said. “Their phenomenal ideas and concepts are two big reasons why the NYX Awards will continue to honor proficiency and expertise that transcends beyond normalcy.”

Andersen learned recently that his scans were clear, and he still remains cancer free.

“It turned out that the operation that they did in Duke was a complete success, so I will be playing again,” Andersen said.

He plays frequently for Trinity Episcopal Church in Lumberton. Videos of the performances can be viewed on the church’s YouTube channel.

“Rhapsody for Piano” can be viewed at the Givens Performing Arts Center’s website.