Authorities in Colorado have narrowed down the source of a massive wildfire that destroyed nearly 1,000 homes in the suburbs around Boulder to a property owned by the Christian fundamentalist cult Twelve Tribes.

The Marshall Fire began spreading Thursday and has now been tracked to a burning shed on Colorado State Highway 93 and Marshall Road.

Boulder County Sheriff Joe Pelle warned Monday that investigators will be ‘careful’ before reaching any conclusions. Sheriff’s officials previously confirmed that they carried out a search warrant in connection to the fire.

The Tribes is a Christian fundamentalist group, sometimes called a cult, that sprung out of an early 1970s youth Bible study group in Chattanooga, Tennessee, according to the Southern Poverty Law Center.

The group has offshoots in other countries and has been associated with extremist teachings on race and homosexuality, as well as child labor violations. 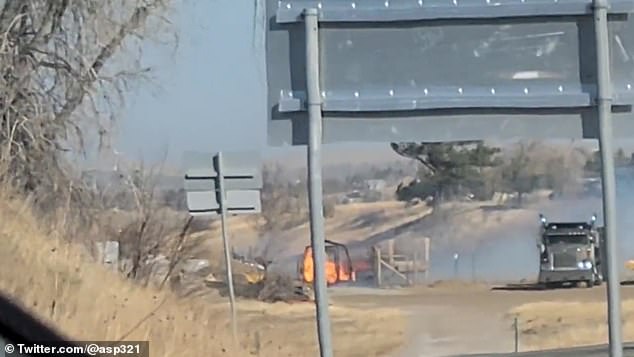 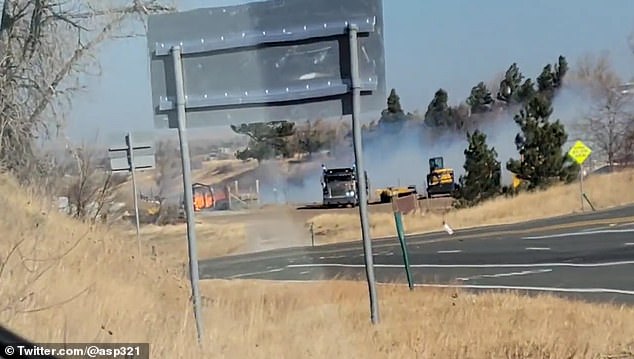 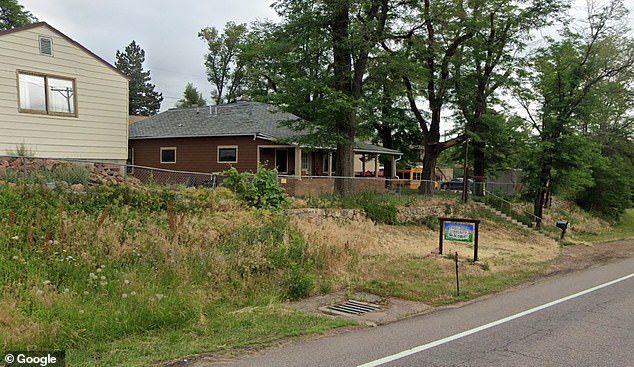 Authorities have  served a search warrant regarding the Marshall Fire, though the exact location is unknown. Above, a Twelve Tribes home in Boulder 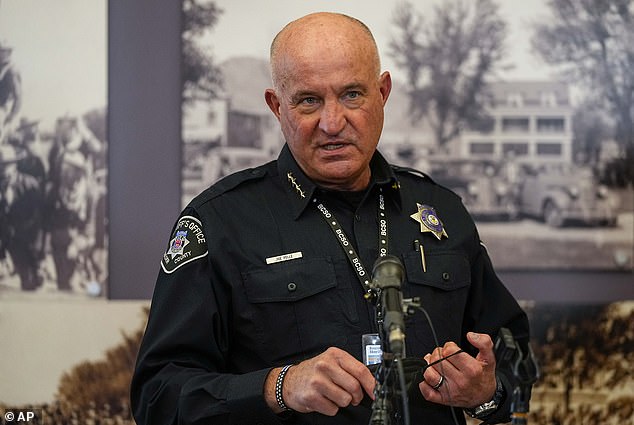 Boulder County Sheriff Joe Pelle warned Monday that investigators will be ‘careful’ before reaching any conclusions. Above, Pelle on Sunday

The Marshall Fire ravaged through 6,000 acres and destroyed 1,000 homes and businesses in Boulder County, according to Denver station KMGH.

The wildfire erupted Thursday in and around Louisville and Superior, neighboring towns about 20 miles northwest of Denver with a combined population of 34,000.

Evacuations were ordered in both towns.

On Thursday, a passerby captured a video of a burning shed, writing, ‘There is no fire beyond this point towards the west side.’

The shed, nestled in Twelve Tribes property, is now the focus of a Boulder County Sheriff’s investigation into the source of the devastating fire.

‘We will sort it out. It’s an active, open deal and the outcome of that investigation is vital, there is so much at stake,’ Sheriff Joe Pelle said in a press conference Monday.

‘We’re going to take our time and be methodical because the stakes are huge,’ he added.

The Twelve Tribes counts 3,000 people among its members, according to a New York Times review of the group’s website, which is now down. 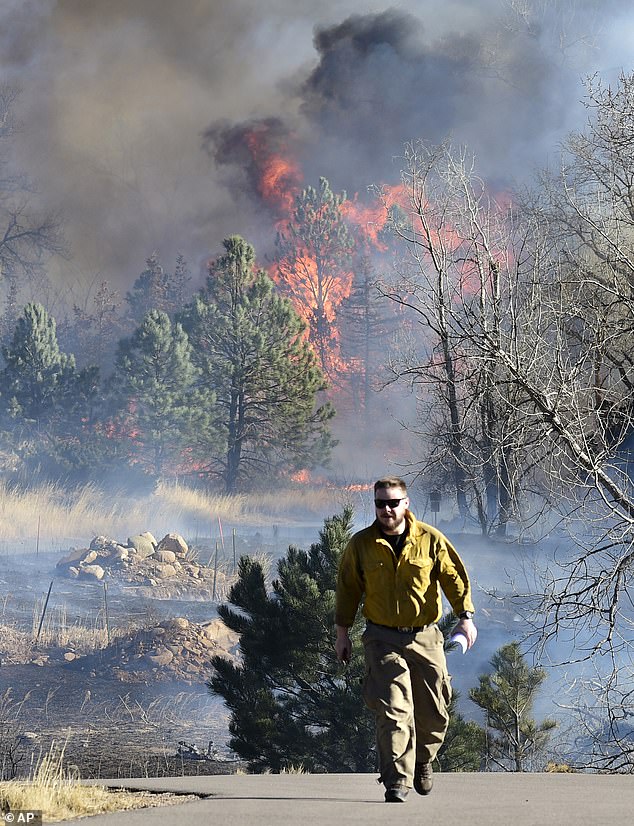 The Marshall Fire burned through more than 6,000 acres and destroyed about 1,000 homes and businesses. Above, a firefighter walks near a home north of Boulder on Thursday 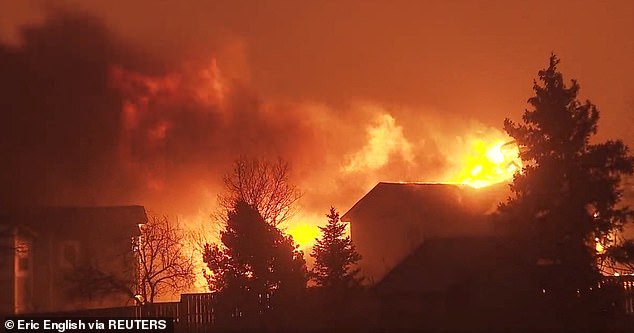 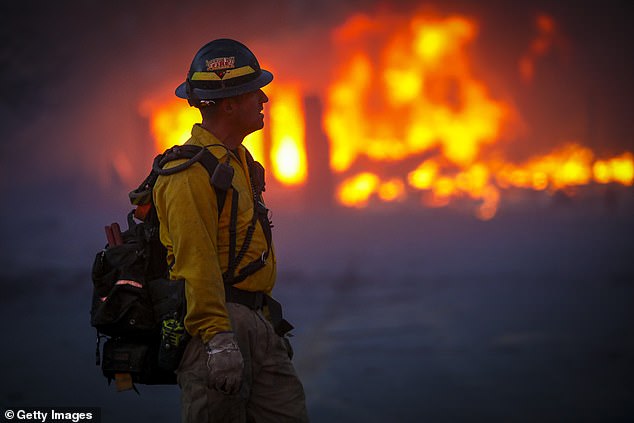 ‘We’re going to take our time and be methodical because the stakes are huge,’ Sheriff Joe Pelle said Monday. Above, a firefighter walks through smoke in Louisville, Colorado on Thursday 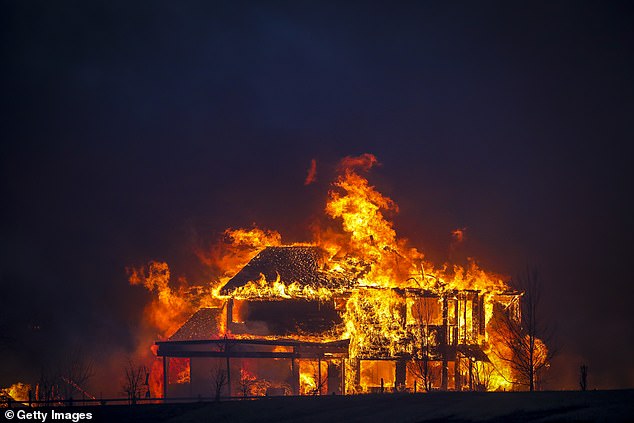 A home in the Centennial Heights neighborhood of Louisville, Colorado burns on Thursday

They believe in Jesus, who they call Yahshua, and strictly follow the Old and New Testaments.

‘Our men have beards because men were created with facial hair,’ a Google search index of the group’s website reads. ‘Our women wear the clothes they do because of their desire to be modest.’

A man named Mike Zoltowski told station KMGH that he saw a fire truck near his home, by the Twelve Tribes property, on Thursday.

Who are the Twelve Tribes?

The Twelve Tribes are a fundamentalist Christian group.

They grew out of an early 1970s youth Bible study group led by Elbert Eugene Spriggs and his wife Marsha in Chattanooga, Tennessee.

They count 3,000 people among its members and believe in Jesus, who they call Yahshua. They also strictly follow the Old and New Testaments.

The group operates the Yellow Deli in Boulder and Mate Factor Cafe in Manitou Springs.

‘Our men have beards because men were created with facial hair,’ a Google search index of the group’s website reads.

‘Our women wear the clothes they do because of their desire to be modest.’

The group has been accused of holding racist and homophobic beliefs and of child labor exploitations.

In 2001, the New York State Department of Labor found two violations involving children at its factories, which make shampoo and other products.

‘For about 45 minutes, this went on. Then, all of a sudden, another fire started at this corner,’ he said. ‘That’s when I got a little bit nervous about my situation.’

Zoltowski told station KDVR that he saw a fire truck try to put out the fire in the shed.

‘As soon as I turned around and came back, they were gone,’ Zoltowski said. ‘And that’s when I realized something is seriously wrong here because the shed was still burning.’

Anne Michaels, a kindergarten teacher driving through the area on Thursday, recalled seeing the fire clearly coming from the Twelve Tribes property while she was on the pone with her mother.

On Saturday, Boulder County Sheriff’s officials confirmed they served a search warrant on a property regarding the Marshall Fire, according to the Denver Post. The exact location of the search has not been made public.

The SPLC calls the Twelve Tribes a ‘cult’ and says that ‘on first impression its communes and hippie-vibed restaurants and cafes can seem quaint and bucolic.

‘But beneath the surface lies a tangle of doctrine that teaches its followers that slavery was “a marvelous opportunity” for black people, who are deemed by the Bible to be servants of whites, and that homosexuals deserve no less than death.’

The group grew out of a Bible study taught by by Elbert Eugene Spriggs and his wife Marsha in Tennessee, the SPLC says.

‘Followers who belong to “The Community,” as members refer to the Twelve Tribes, surrender their earthly possessions to the group and live communally, often working at the Tribes’ restaurants or tea shops – called The Yellow Deli and Mate Factor, respectively – or simply laboring on the communes or for one of the other cult-owned businesses,’ the center says. 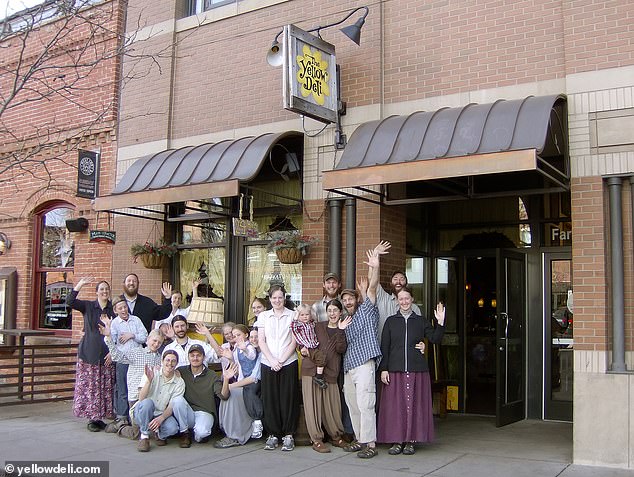 The Twelve Tribes was founded in Tennessee in the 1970s out of a Bible study group. They operate the Yellow Deli in Boulder, above

‘The internet is highly restricted, and secular music, books and other “worldly” influences are verboten.’

The group allegedly shuns gay people but boasts about members who are ‘formerly’ gay.

They have been accused of using child labor in its factories and beating children. They have denied the allegations.

In 2001, the New York State Department of Labor found two violations involving children at its factories, which make shampoo and other products, according to the New York Times. 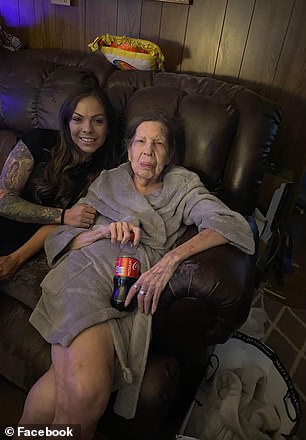 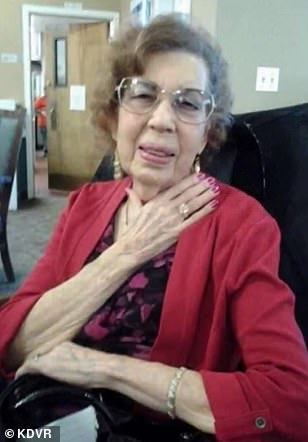 Crews are still looking for 91-year-old Nadine Turnbull, from the town of Superior 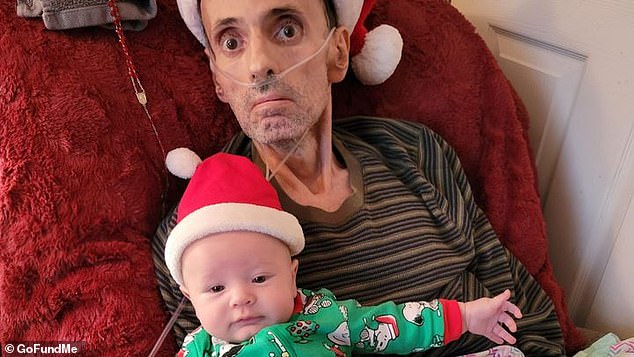 Gonzalo ‘Chalo’ Quesada, 58, died from a combination of his illness, smoke inhalation and the sheer physical trauma he experienced by the evacuation

‘We are still missing a woman from the town of Superior and a man from out by Marshall. The search for those folks is still underway,’ Sheriff Pelle said Sunday, according to CNN. 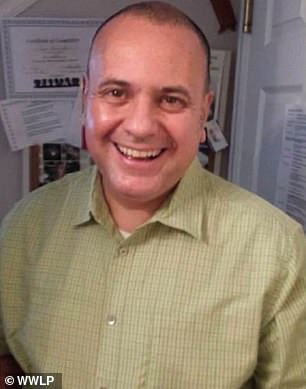 Quesada was housebound and had no verbal or motor for ten years. Suffering from Alzheimer’s and aphasia, doctors believe he would not have lived for much longer

One of them is 91-year-old woman Nadine Turnbull from the town of Superior, who has been missing since evacuations began on Sunday.

Her family say that she was in a home with one of her nieces as the fire draw closer. Somehow, the pair became separated as firefighters set about evacuating the area.

Nadine’s family hope that rescuers may have taken her to an evacuation center.

She was reported missing to the Boulder County Sheriff’s Office.

Gonzalo ‘Chalo’ Quesada, 58, died on Friday morning after he was saved from his burning home in Superior.

A former software engineer for IBM, Quesada was housebound and had no verbal or motor for ten years. Suffering from Alzheimer’s and aphasia, doctors believe he would not have lived for much longer. 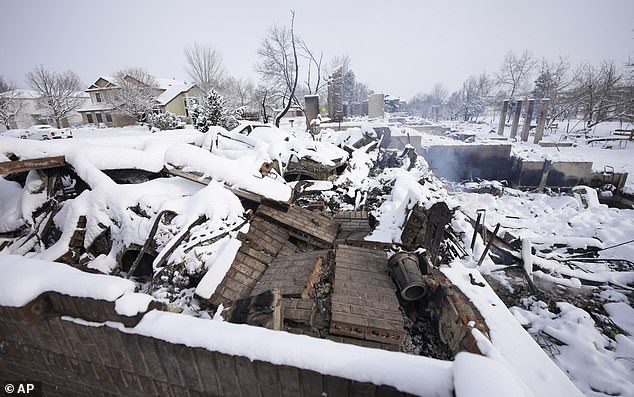 Almost a foot of snow was dumped on Colorado on New Year’s Day, hampering recovery and rescue efforts in the wake of the wildfire 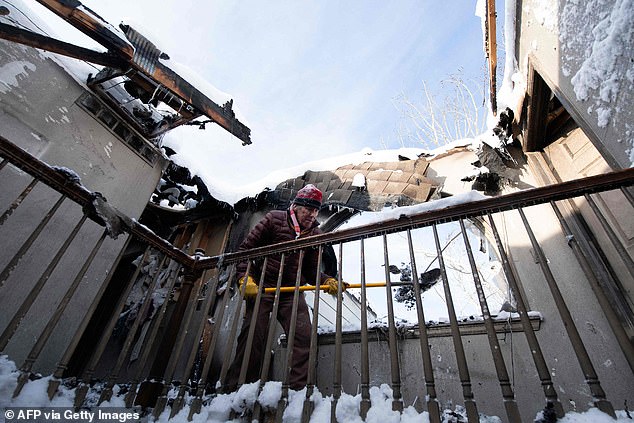 Mike Jones of Boulder, Colorado shovels debris and snow out of his girlfriend’s home which was destroyed by the Marshall Fire in the Rock Creek neighborhood in the town of Superior, Boulder County, Colorado on January 1, 2022

His family was told that smoke inhalation and stress contributed to his death, according to Denver station KCNC.

A GoFundMe page has been set up by the family who also lost their home in the fires.

Almost a foot of snow fell on Colorado on New Year’s Day, hampering recovery and rescue efforts in the wake of the wildfire.

Snow and temperatures in the single digits cast an eerie scene amid still-smoldering remains of homes – with an estimated six feet of snow still forecast for certain parts of the state.

Despite the shocking change in weather, the smell of smoke still permeated empty streets blocked off by National Guard troops in Humvees on January 1.