Aileen Martinez takes her sketchbook everywhere she goes. It’s splattered with paint, creased at every corner, and still full of blank pages. She recently returned from New York City, and her sketchbook shows it: taxis, a tattoo parlor, couples dancing in a park. Her style is simple: She draws what she sees.

“With drawing, there’s a lot of observation that goes on,” Martinez says. “Just observing and really looking and seeing things for what they really are, and not what people think they are.”

Martinez has always wanted to be a full-time artist, but didn’t see the dream come to fruition until November 2020. She was born and raised in Phoenix and went to school to be an art therapist at Southern Adventist University in Chattanooga, Tennessee.

Just before her college graduation, Martinez realized she enjoyed creating art more than what she was originally studying. After working various jobs for around seven years, Martinez has used the last year to make a name for herself back home in the Valley.

Support the independent voice of Phoenix and
help keep the future of New Times free.

She’s best known for her drawings and watercolors of local landmarks that she started selling at downtown Phoenix pop-up markets. She’s done everything rom The Van Buren and Welcome Diner to Crescent Ballroom and Grand Avenue. 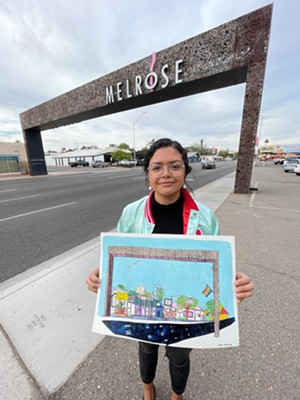 Martinez shows off her depiction of the Melrose neighborhood gate.

“I’m a very nostalgic person,” she says. “Sometimes I do draw places because I just like how they look, but for the most part everything I’ve drawn has some sort of emotional connection.”

Phoenix locals connect with her art as well. She takes commissions drawing homes in the Valley, her Instagram account has nearly 3,000 followers, and Martinez says she saw someone brought nearly to tears by her drawing of downtown Phoenix music venue The Van Buren.

Martinez is a self-proclaimed concert fanatic herself, and also loves thrifting and trying out local restaurants and coffee shops.

When she first began painting exterior scenes, Martinez would do all of her work on location, arriving early in the morning and spending seven or eight hours in the sun trying to grasp each detail of her subject.

“It was rough,” she says playfully. “I don’t torture myself like that anymore.”

Now, Martinez just snaps a picture and does her painting in local coffee shops where distractions are less prominent than at home. Her walls at home are decorated with other local artists’ works, a rustic Route 66 sign, and a few references to The Office. And much like the art that is the focus of The Office’s series finale, she has a knack for making the prosaic look captivating.

Martinez’s success with art in the Valley has given her a chance to indulge in her favorite hobby of all: traveling. She spent over a month in Chicago this summer, teaching students at a nonprofit art camp and hosting an exhibition of her own.

“[Teaching] is refreshing because they get so excited about new concepts that to us artists are kind of mundane after a while,” she says.

More than anything, Martinez says the last year has helped her grow as an individual. The biggest lesson she’s learned is to “just ask.” After drawing locations, she always pitches her work to the owner to see if they’d have interest in displaying or selling it.

She witnessed how daunting that task is firsthand when she traveled to Los Angeles this summer and drew Amoeba, the world’s largest independent record store. Martinez hasn’t heard back just yet on if they’re interested in buying her work, but she isn’t bothered.

“At the end of the day, it is still a win for me because I asked,” she says. “They’re just people, and if they say no, they’re gonna say no. I still made something that I enjoyed.”